Authorities from 31 countries around the world met during June 15th – 17th in Seville in the framework of the V International Railway Convention which Mafex, the Spanish Railway Association, organizes every two years since 2007.

The Convention, which had the support of ICEX Spain Export and investment and the Ministry of Industry, Energy and Tourism, consolidates itself as an international reference platform in which international manufacturers, operators and railway managers know in first-hand the complete portfolio of solutions and services offered by the Spanish railway industry.

Also, this professional meeting served to analyse the main projects and investments planned in more than thirty countries who bet on the railway as a mean of transport.

The opening ceremony was attended by the president of the Spanish Railway Infrastructure Administrator (ADIF), Gonzalo Ferre; the Director General of Industry and Small and Medium Enterprises of the Ministry of Industry, Energy and Tourism, Victor Audera; the CEO of ICEX Spain Export and Investment, Isaac Martin Barbero; and Mafex’s President, Victor Ruiz Piñeiro, who in his speech reiterated the commitment of Mafex to “boost the activity of the Spanish railway companies, help them in their great international experience and further strengthen ties with major rail representatives of the world”.

The general director of Industry and Small and Medium Enterprises of the Ministry of Industry, Energy and Tourism, Victor Audera, affirmed that the railway is “a particularly strategic sector,” which is in “key reference positions in the world due to the great technological leap achieved in the last 25 years.”

In his view, the railway is called to be “a major role” in the industrial recovery, within the objectives set by the government for 2020.

Furthermore, the CEO of ICEX Spain Export and Investment, Isaac Martin Barbero, emphasized that there will be an increase in support for innovation, “which is the bedrock of internationalization” and works for strengthening intangibles such as the “value “provided by the Spanish industry will be carried out.

In the same lines, the president of Adif, Gonzalo Ferre, said the developer and manager of railway infrastructure “is committed to launch more long-term contracts, to enhance the knowledge of the company providing the service, therefore generating and more stability” to the company. 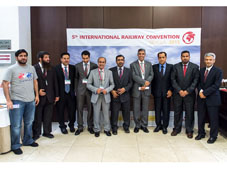 These meetings helped strengthen trade ties between attendees and explore opportunities for cooperation between them. It also facilitated foreign guests to know in detail the broad portfolio of products, services and technological solutions of the Spanish industry.

Also, 37 technical visits to installations and plants through the main Spanish railway regions like Asturias, Basque Country, Madrid and Valencia, among others were organized.

International authorities were able to visit the control centre and maintenance workshops of Metro Seville and the tram control centre of this city. Also, an important part of the foreign delegation travelled in the first High-Speed line to be built in Spain more than two decades ago, the line Seville – Madrid, and was able to visit the train cabin during this journey.

The Spanish railway experience in the world

The program of the 5th Convention was completed with panels of parallel conferences on the investment plans of foreign guest organisms and the exposure of Spanish technological innovations. Under the generic title of “Spanish Rail Industry Forum”, specific cases of projects that have been carried out successfully in urban transport networks, High Speed and medium distances by the Spanish industry both national and international.

Among the Spanish participating companies are Acciona Ingeniería, Alstom Transporte, Arcelormittal España, Assignia, Caf, Cetest, Getinsa-Payma, Idom, Ineco, Nem Solutions, Typsa and Vossloh España, as well as presentations on the experience of the Spanish railway administrations such as Adif, Renfe, TMB and Euskotren.

All of them exposed their role played in the development of the main railway networks in the world and their high technological capacity to cooperate on new projects.

As for the sessions given by international guests, the first day, June 15, was focused on Middle East and Africa, with speeches by senior personalities from the railway sector in UAE, Saudi Arabia, Bahrain, Oman, Algeria and Angola, with the notable intervention of the GCC (Gulf Cooperation Council). A panel was reserved for Europe, where EU railway programs and transportation plans in countries such as Czech Republic, Macedonia, Norway, the Netherlands and Turkey were exposed.

All markets in which the different governments have invested heavily in rail and urban systems as a sustainable and efficient transport, and where Spanish companies are currently working and exported in 2014 more than 2,800 million euros.