Extension of the tram.under construction

Since its entry into service on May 1, 2013, the city of Oran has a new mode of transport linking the Western area of Essenia Sidi Maarouf. It consists of 18.7 kilometres and 32 stations. Engineering works were supplied by Isolux Corsán, and the rolling stock by Alstom.

In addition, studies for future extensions to the west are being carried out: 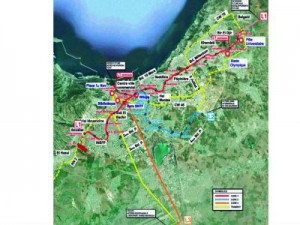 Entreprise Métro d’Alger (EMA) has awarded the Spanish firm Sener, in an international public bidding, the contract for conducting studies of Metro of Oran. This project extends from the preliminary study to choose the most convenient route for the city until the conditions for the operation of the line with the project layout in different areas. The initial esti­mate, which will have to be confirmed during the preliminary study, considered two lines of 17 kilometres and a total of 20 stations. The resulting investment would therefore be €1,200 M. The devel­opment of the line is carried out in four phases and is estimated that it could be finalized in 2040.